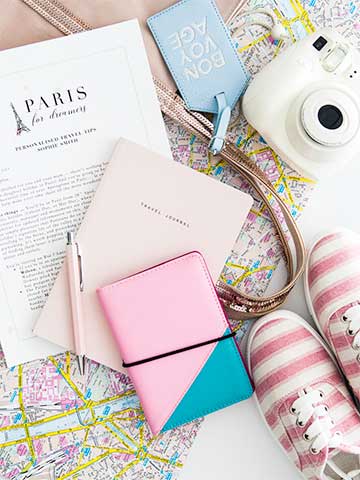 Biblio File: Paris by the Books

Of all of Paris’s bridges, the Pont des Arts must surely be the loveliest, with its iron arches rendered so light and lacy, leaping across the Seine as daintily as a ballerina.

But it’s also because of the way the bridge seems to pull Paris together so effortlessly. When you linger there, in the middle, suspended over the Seine, you feel so central to this city.

A 360-degree view is a lesson in how Paris came to be. Look eastwards and you’ll see the Gothic spire of Sainte-Chapelle piercing the skyline above the Île de la Cité, home to the ancient fishing village of the Parisii.

… at the other, the baroque dome atop the Institut de France, originally the Collège des Quatre-Nations.

You can almost feel, as you turn about, as though Paris is forming itself around you.

It’s the ideal viewing platform no matter the time of day, although at sunrise, when you have the footbridge to yourself, you feel so at one with the city, watching the first rays spill glitter over the still waters of the Seine.

At this quiet, reflective time, you notice how the Île de la Cité looks so firmly anchored there, like a large boat. So set in stone amid the ripples. It seems to illustrate the city’s motto, fluctuat nec mergitur, which means Paris might be rocked by waves but never sinks.

During the day, the Pont des Arts basks in sunshine and activity, but it comes into its own as the languidness of golden hour approaches, when the setting sun soaks you in syrupy warmth. Unfurl a gingham sheet, and savour a picnic complete with rosé and macarons (just to enhance the sweet, rose-tinted mood).

Hopefully a jazz band has set up for the evening, lulling you into the moody dusk, as the lampposts flicker on their gas-like glow, and the Eiffel Tower sparkles in the distance.

The tower, incidentally, which opened in 1889, was not Paris’s first metal landmark. This cast-iron bridge dates to the beginning of that century, to 1801.

Iron was scarce and expensive at the time, and not considered as chic as limestone, the classic building brick of Paris, but Emperor Napoléon had a visionary outlook and an engineering mind. He shafted the original plans for a heavy stone structure. And he called this modern creation the Pont des Arts — Bridge of Arts — in tribute to the fact that it joined the Louvre, now a museum, and the opposite monument, which used to house the École des Beaux-Arts.

The bridge was declared a national historic monument in 1975, a classification that sadly couldn’t protect it from an altercation with a barge several years later, which saw it part-collapse.

It was rebuilt by 1984, to exact plans, except for the fact that there were now seven arches rather than nine, to allow for modern boats to pass beneath as easily as people do above.

The footbridge is now decked in wooden planks, which enhances its quaintly rickety feel.

And gives it the impression of a stage. It’s here where buskers play, jugglers juggle, clowns clown around, artists paint …

… continuing a long tradition of the Pont des Arts as artistic inspiration:

Claim a spot on one of the olde-worlde bench seats and you’ve got one of the best shows — and backdrops — in town.

It’s also the perfect people-watching spot. You’ll see hand-holding honeymooners and perhaps even a proposal. (Although the misty-eyed couples aren’t quite as plentiful as the days when they could attach a padlock, marked with their initials, to the bridge’s rails, and kiss the key before tossing it into the Seine; the countless ‘love locks’ literally weighed the bridge down, forcing the authorities, in 2015, to remove the side railings and put up glass panels.)

You’ll also see Instagrammers in action, following in the high heels of the many models who have been illustrated, painted and photographed here over the years.

You might also spot a celebrity or two. The Pont des Arts, after all, is a favourite location for movies and television producers. It featured in the finale of the Sex and the City series, for one …

… as well as in Gossip Girl.

In the quintessentially Parisian film Amélie (2001), Audrey Tatou’s quirky alter-ego experiences a life-changing epiphany as she walks across the bridge.

‘Amélie has a strange feeling of absolute harmony,’ says the narrator. ‘It’s a perfect moment. Soft light, a scent in the air, the quiet murmur of the city. A surge of love, an urge to help mankind overcomes her.’

Anyone who has strolled across the Pont des Arts, when the sunshine is just so, will well understand.

The height restrictions of central Paris are a key factor in the city’s harmonious charm. You see so much of the sky that you feel as though you can breathe, inhaling deeply and relaxing all the more with each exhalation — which can’t be said for most of the world’s major metropolises. One of the […]

It’s the week of La Rentrée in Paris, the return to the rhythm of city life, the start of a new school and work year. And one of Parisians’ favourite rituals in the time-honoured tradition that is La Rentrée is to stock up on beautiful stationery. Which is easy to do in Paris, where papeteries […]

Katrina is an erstwhile beauty journalist who lives in Sydney, Australia — but regularly escapes to Paris, her soul city. She has written two books on her favourite subject, and launched this site to connect with other Paris dreamers around the world.